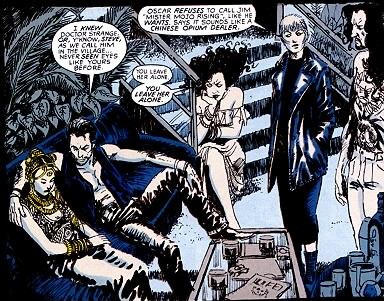 History: (Druid#1)- During the period following Druid's betrayal of the Secret Defenders, he purchased a penthouse in New York to hide out. There, he surrounded himself with various unsavory types, including Hemingway, a mystic wanna-be, Redeyes, a voodoo practitioner who would cut herself, who was planning to kill Hemingway, and Baby Icon, a woman who could see ghosts (including Andy Warhol, who gave her her nickname). Another, Scurve, attempted to summon up the devil, bringing Daimon Hellstrom instead, who slew him. After being humiliated by Hellstrom, Druid resolved to empower himself.

(Druid#2)- After being transformed by earth spirits, Druid set out with Hemingway, and ordered Hemingway to find clients he could aid with his powers. Hemingway returned with Nekra, priestess of the Cult of Kâli, who told him about the Second Assembly's plan to create a "false god" from stolen corpses.

(Druid#3)- After Heminway beat information from a local occult expert, Druid set off and destroyed the Second Assembly.

(Druid#4)- Realizing that he had met his geis (achilles heel), Druid became desperate for power, and sacrificed Hemingway. As Hemingway died, he finally believed Baby Icon could see ghosts. Baby Icon, terrified, ran, but was killed by a Smoke General from the Dry Academy. Druid intended to keep Redeyes alive for awhile, but the Dry Academy murdered her as well.

Clarifications:
Hemingway should not be confused with:

Redeyes has no known connection to:

Non-Marvel Copyright info
All other characters mentioned or pictured are ™  and © 1941-2099 Marvel Characters, Inc. All Rights Reserved.
If you like this stuff, you should check out the real thing!
Please visit The Marvel Official Site at: http://www.marvel.com